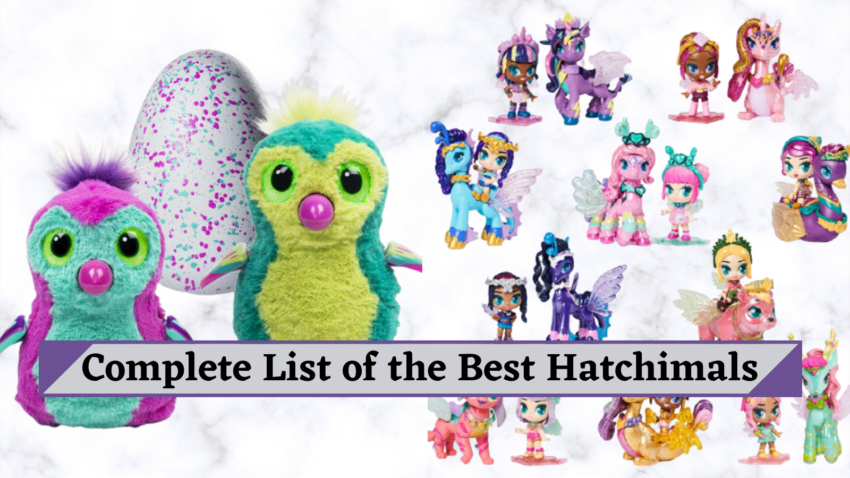 Some researchers say that learning through play is an important part of the kids’ growth. A Kids’ mind is expanding just by looking at their environment and taking in their surroundings, also with the kind of toys they will play. Toys will have an important role in their development, among those, Hatchimals are one of the best toys for kids.

Hatchimals are little robot animals that come inside plastic eggs, introduced by the Spin Master. They can hatch themselves from an egg with your help, once the hatchimal comes out of the egg, you can teach the hatchimal to walk, talk, and play games.

In this blog, you will get a full clarification about the best & top hatchimals colleggtibles, and will have an idea of the price range of these toys with good quality. By playing with these toys, kids can learn different skills.

Check out an overview of the Hatchimals.

In addition with these toys, check out best kids toys.

Hatchimals Fabula Forest introduced new hatchimals characters, Tigrette, Puffatoo, it’s a surprise to know which hatchimal you will get until you hatch the egg. These hatchimals have metallic ears, a terrific tiger tail, new games, and new music. When you hug and hold the metallic speckled egg and put your ear to the eggshell, you can listen to its heartbeat.

Like all hatchimals, hatching the egg involves tilting, tapping, touching the egg, when you see the rainbow eyes inside the egg, it means it’s ready to hatch. You can rub the bottom of the egg to encourage the hatchimal to peck the egg to come out easily.

Once the hatchimal comes out from the egg, like all other hatchimals it will also have 3 stages to grow from baby to toddler, and to kid. The new thing about these Fabula Forest hatchimals is, they can learn your name in all of the three stages. To do this you can squeeze its belly & touch its head at the same time, you can tell your name, when you see her eyes turn to pink, you will be able to hear her response when you release her belly & head.

When it says I Love You, then they love to meet new people and learn new names, you can teach your friends names too. As the hatchimals get older you will unlock more games. In baby mode, it can roll around, flap its wings, in toddler mode it can learn to talk, walk, dance, and in kid mode, it can play three music games with you. Pack includes 1 hatchimal, an instruction booklet, a cheat sheet, 2 AA batteries required (included).

Hatchimals Wow, Llalacorn 32- inch tall interactive with Re-Hatchable Egg hatchimal is the biggest surprise of all hatchimals. It’s the largest and first-ever Re- hatchable hatchimal called Llalacorn. Hatchimals WOW is the first hatchimal to express their emotions and feelings through the movement of the neck that can magically grow up to 32 inches tall or shrink down on its own. It’s a soft, fluffy fabric, and has a plush snout and expressive eyes, you will never know what color hatchimal will come out until you hatch.

Every time you need to hatch the egg, then Llalacorn will wake up in 1 of the 10 moods, out of the egg you can cuddle, care, and play or tickle her. Hatching only takes 5  minutes, but this toy can’t do anything without hatching her. To hatch the egg, you need to tilt the egg back and forth, when you see the rainbow eyes, then it is ready to hatch and she will grow taller until she pushes the egg top off, singing Hatching Birthday.

When you snuggle Llalacorn, it will coo and shrink down to a small size. When we play music, it will sing along with music and will grow taller to reach the high note. It features over 250 sounds and reactions, we can discover more about this toy when we play with her.

It comes with Hatchimal WOW, Re- hatchable egg, confetti fruit Accessory & an instruction guide. It’s great for kids aged 5 and up and requires 4 AA batteries(included).

The waterfall playset is light up playset sized for Hatchimals CollEGGtibles figures. It comes with a fun colorful area, an exclusive season 4 hatchimal figure, a playset, and an instruction sheet. It features a glittery waterfall that lights up with different flashing light patterns and we can extend this to double as a slide.

Kids can help their figures, go down the slide and wish upon a star at the same time. There are also two spinning nests, a pool, a swing, and cloud nests for hatchimals to sit in. There is one hatchimal( one season 4 hatchimal collectible) included in the set, that figure features a translucent body that shines bright when placed on the lights.

By playing with this toy, kids’ imaginative play will be improved a lot, in this set one hatchimal figure is included, kids can add other hatchimals colleggtibles(other figures sold separately).  This playset is smaller in size and is great for smaller play areas. This set is recommended for kids ages 5 years old and up. Make a wish and hatch bright with the waterfall playset. It requires 3 AAA batteries(not included).

Hatchimals Surprise, each magical speckled egg contains two twin interactive hatchimals with unique personalities. It includes 2 hatchimals, an instruction guide, a cheat sheet, and 2 nests.If you open the pack you can see an egg in it, when you hold and rub the egg and tap it for some time, you will hear adorable sounds and may even see a set of eyes inside, it will push the eggshell and comes out, with a sound like “hatchy birthday”. Once the first hatchimal has pushed its way out of the egg, lift your second hatchimal out and the fun begins.

It has five stages like egg, hatching stage, baby, toddler, and kid. Each twin has a unique personality, one twin loves to move and the other one can repeat whatever you say. You can make to grow your hatchimal from baby to toddler to kid and they will learn new things at each stage. These twins will talk, sing, dance, tell jokes, play games, and more. These hatchimals love to interact with each other, they will say “I love you” and like any siblings, they will even bicker.

You can give the best and comfortable place to hatchimals to play with their nests. It’s the best gift for kids ages 5 to 7 years and requires 3LR44 batteries(included).

Hatch animals live inside of the egg, each egg contains one of two interactive hatchimals. Pack includes a hatchimal, instruction booklet, reference guide, 2 AALR6 batteries(included). You can hold the egg and hear their heartbeats, for fun you have to flip, when you tab it, they will tab back, but they will need your help to hatch.

When you see the rainbow eyes inside the egg, it means your hatchimal is ready to hatch, your love, care, touch is needed to hatch. Your touch encourages them to pick their way out of the egg, it’s a once in a lifetime experience. After hatchimal out from the egg, it has 3 stages to grow from a baby to toddler, and to kid. This hatchimal sings a “hatchy birthday” each time when it’s entered into a new stage.

You can teach your hatchimal to walk, sing, dance, play games, and more. This hatchimal even repeats your words in its voice.  These are good for children ages 5+ years. Blue/Purple hatchimals look cute and amazing toys.

This box includes 6 packs of 4 colleggtibles+bonus hatchimal, collector map inside. These are the season 4 hatchimals colleggtibles, they can shine bright when you place on the light. In season 4, they introduced over 80 characters to hatch and discover. You can use your love and care to warm each egg until the color changes from purple to pink.

When you start hatching other eggs, lift the glittery lid of your egg carton and warm up each egg, rub the purple heart until it turns to pink, you can gently press down to crack the shell and meet your new friend. You can find a rare golden hatchimal in the 100’s.

You can use this case to play and display these hatchimals and carry your hatchimals colleggtibles. These nests are molded at the bottom, your adorable hatchimals will always be cozy inside. It’s good for kids ages 5 years and older.

To start hatching another 24 eggs, you can use your love and care to warm up each egg until the purple heart turns pink. If you gently press down to crack the shell, then you can meet your new hatchimal friend. It has 6 flip-down nests, these nests can be very useful to play and display your hatchimals.

This set featuring heart-shaped accents, flowery detailing, and flecks of glitter, makes it easy to carry your hatchimals with you and to pack easily when it’s time to pack up.

Inside of the egg, it has crackable sections, peel and reveal compartments, and also there are many egg surprises to identify. The limited-edition pixie is glittery from head to toe, with purple and pink hair, gold and pink dress, fluttery wings and a poseable head, and her accessories different masks, necklaces, crowns.

You can find the 10 exclusive hatchimals colleggtibles and 10 crowns only in this egg and has 1 lip gloss, 2 sheets of hatchimals royal stickers, 3 hatchtopia life tokens. This mega secret surprise can act as a great storage and display case for all your new surprises. It will have a handle to carry easily.  It’s a great gift for the ultimate collector aged 5 and above.

This is a hatchimals colleggtibles pack, it includes one of each of the following packs from season 1 4-pack+bonus, 2-pack+nest, 1 blind set, these items are chosen at random at the packaging.

Check out the most popular christmas gifts for kids.